The Student Engagement Action Team focused on developing a more robust support structure for all undergraduate student organizations, and actions are already underway with special attention to those that nurture a lively campus environment. Several recommendations were directed at improving student involvement and participation within the campus community. The newly configured Office of Student Engagement is working to enhance the experience of students with both Greek and non-Greek organizations. The addition of student staff and use of Eventbrite as an event management system has reduced event costs and police presence at the Barn and in lounges.

Additionally, opportunities for student leadership, peer education around issues of human difference, and civic engagement have increased. Students were able to pitch their ideas to improve our campus community in the DeacTank project. Two student teams were awarded $1,500 each to fund their ideas for campus projects focused on diversity and inclusion.

Students from across campus participated in the Branches Social Justice retreat from February 19-22, 2015 and October 15-18, 2015, in which they explored issues of identity, including ability, gender, race, religion, sexual orientation, and socio-economic status. Additionally, in co-sponsorship with Student Government, Alexa King (‘16) and David Myers (‘15) organized,“Taking the Lead”: A Student Facilitated Discussion on Sexual Assault on March 4, 2015. More than 300 students gathered for a public discussion of sexual assault in the university atmosphere. 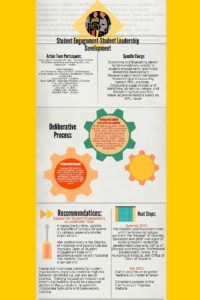 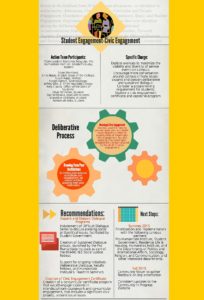 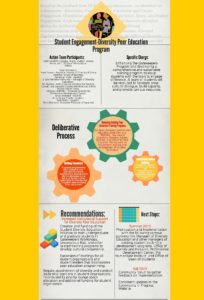 Items Advanced by This Team

Recommendation: Appoint ambassadors or members of student orgs to focus on diversity and conduct

Last Summer, a group of students attended the PULSE conference and created the Sustained Dialogue program here on our campus to encourage interaction across differences with the support of the Pro Humanitate Institute. Additionally, The Intercultural Center recruited students from diverse backgrounds to serve as an inaugural group of intercultural ambassadors. These students will support the Intercultural Center initiatives and programs and be trained to help facilitate intercultural dialogue among students.